11 – The style and the spiritual

In this section, you can admire works by the great masters of the style of our region. First of all, Severino Spazzini from Guidizzolo, author of a colossal graphic body of work on display in many national exhibitions. His is an extremely refined, silent, and discreet style that, in the attempt to define a small portion of time, also preserves its life breath. Getting lost in the meanders of his compositions is not only recommended but is an approach that comes naturally, seizing the viewer and pulling them along in a gentle, aimless stroll.

Franco Bassignani, proud representative of the great family of expert engravers, has always been one of the living souls of our collection, thanks to his countless works on display in joint and individual exhibits, in addition to the precious works in permanent exhibitions. In Composizione con zinnia and Muti silenzi, both from 1980, tradition and research come together and the classical approach derived from the history of art embraces a stratification tending towards shapelessness. This encounter/clash gives unleashes a temporal spark that acts as a visible effect of pure anachronism.

Here you can admire the impressive drawing of the Angelo by Amleto Bocchi, which the artist from Brescia gave to Luigi Monfardini, his student. This is thought to be a preparatory drawing for an altarpiece in which angel is depicted in adoration of a central sacred image.

Alessandro Dal Prato is one of the most important figures of the artistic scene both in Mantua and beyond. Born in Roncoferrato in 1909, he moved to Mantua with his family not long after. Although he joined the Mantuan “Novecento” movement led by Cavicchini in 1933, Dal Prato went on to rediscover the formal and aesthetic values ​​of post-impressionism and Chiarismo. The great oil painting presented here is more influenced by these refined and light moods, while his studies on Mantuan architecture show a precise and elegant style, far removed from academism. Another activity that would prove fundamental would be his teaching, which led him to found the Art School (now an arts-focused secondary school) in Guidizzolo in 1935, which is still open and dedicated to the same artist today.

In the room that opens on the left, the atmosphere becomes more intimate and the works on display here reveal an intense feeling, whether that of maternal love or a more spiritual, religious sentiment. The short route begins with one of the most touching pieces in the collection: Aldo Rossi’s Maternità. Born in Desenzano, but Castiglionese by adoption, the sculptor was a friend of Brigoni and spanned the whole of the twentieth century before his death in 2017, creating a natural bridge between the great era of Mantuan chiaristi and the contemporary period. In this work, the synthesis and formal reduction are intensified to a very high level, in which the specific connotation gives way to a more general denotation, transfiguring the individual existence so that it acquires a more universal language.

Another sculpture, by the artist from Montichiari Dino Coffani, opens up a way within the religious sentiment. Although the representation suggests a scene of almost courtly love, where a lover is shown serenading his love, asleep under the vault of heaven, the artist’s sculpture echoes the themes and aesthetic treatment so dear to him. The Franciscan context and the Holy Family are, without a doubt, the favourite subjects of this artist and we get see hints of this even here, in an apparently secular scene.

In contrast, the work on display here by Antonio Haupala, a globetrotting painter of Indonesian origins, but who has chosen to live in Castel d’Ario in Mantua for many years, is purely religious. The piece depicts the interior of the Santuario delle Grazie, a sanctuary just outside Mantua dedicated to the Blessed Virgin Mary that was built according to the will of Francesco I Gonzaga, following a vow made to the Virgin to protect the city against the plague that threatened it. Construction (by an architect believed to be Bartolino da Novara) was begun in 1399 and completed in 1406. This work enables you to immerse yourself in Haupala’s typical painting style: the blurred formal treatment, where the lines disappear, giving way to spots of colour to create a dreamlike and metaphysical atmosphere, as if it were an emanation of the spirit.

The section also houses a precious work by the sculptor and mosaicist Riccardo Darra, installed in the most secluded part of the room. The films shot by director Mario Piavoli for the Civic Art Collection’s exhibitions from recent years in premises of the nearby Torre Civica are projected in a loop here. 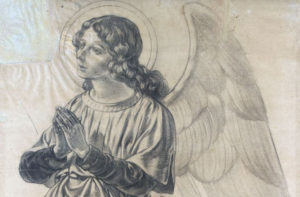 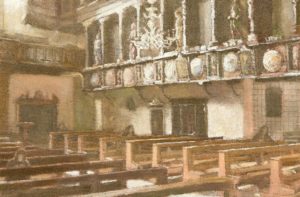 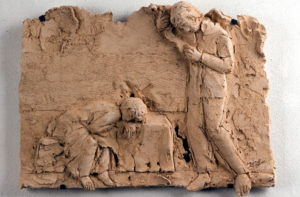