2 – Raffaldini and BUM: artists and restorers

The second section house works by two great outsiders in the artistic scene, not just in Mantua. Arturo Raffaldini was one of the most important figures among the restorers of the first half of the twentieth century. He was responsible for the preservation work done on the Palazzo Ducale buildings between 1927 and 1935, while also working on the frescoes on the unadorned southern wall and on the plaque with cherubs above the door of the Camera degli Sposi room in the Castello di San Giorgio castle in Mantua. His activities were by no means limited to the local area; he was called on for important restoration work in a number of prestigious locations, including Buonconsiglio Castle in Trento, the church of Sant’Anastasia in Verona, the Basilica of San Petronio in Bologna, and the Palazzo Schifanoia in Ferrara. Alongside this work, Raffaldini elaborated a sincere and fascinating aesthetic discourse. The painting Mantova. La Ceramica is a perfect illustration of his poetics, with its use of turbid hues and solid, well-defined spatial elements. The industrial scene is emptied of human presence through a process of sterilisation and silencing that closely resembles Charles Sheerer’s precisionist experiences.

Umberto Mario Baldassarri, known as BUM, was also a restorer who collaborated with Raffaldini and could be considered be one of the few true Mantuan Futurists. His nickname, which is an onomatopoeic acronym, was chosen in 1924 when he was just seventeen, and from that moment onwards became his unforgettable signature. From 1927, he became friends with Tommaso Filippo Marinetti and, during the Ethiopian war of 1935, the charismatic leader of futurism responded to his fellow Mantuan’s missives with letters full of “sparkling adjectives” that represented an unprecedented, if entirely natural, historical overlap of militaristic fascination, the futurist literary game, and Baldassarri’s nickname. The two works on display here, Darsena Mantovana and Rustico montano con figure, most likely belong to the period before he joined the futurist movement, predating the synthetic analysis and energetic currents that would mark his subsequent works. Here we can still find a late-romantic sentiment,in which attention to social conditions and scenes of everyday working life of the time seem to evade a precise definition of the moment. This gives the works a timeless dimension that spans the eras by merit of the difficulty and dignity of work. 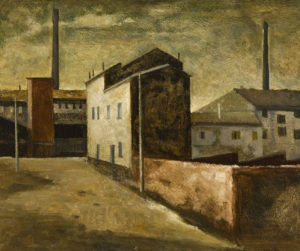