The touching works of Giuseppe Fierino Lucchini are most definitely chiarist in nature. Having moved to Goito at a very young age, Lucchini would move on from futuristic moods before finding his own language by rediscovering the pleasant landscapes of the Mincio and the plains. In these places, he found his own style, developing a tenuous and reserved discourse that was very light, fairytale-like, as in the moving Cancello azzurro andin the solitary and melancholic Dogana.

Guglielmo Cirani was born in Medole in 1907 and would always remain tied to his homeland, passing away in his home town in 1981. His paintings are imbued with a profound sense of nostalgia, in which description gives way to the dream of a lost Arcadia that endures and persists in the air. The purity of his youthful compositions returned even after many years: forty-one years separate Quando c’era il tram and Fiori secchi, but the elegance and lightness of spirit do not seem to have been lost.

Carlo Imperatori, a few years older and also from Medole, would play his own part in the chiarist adventure. Born in 1889, his artistic acquaintances (think of Lilloni, Cirani, and Brigoni), were due also to his role as a master of decoration and enabled him to join the research movement of the “new painters”. His cultured language remained outlined by an academicism that, rather than a research limit, seemed to represent a fixed point to prevent getting lost in the swirling present. I Ronchi and Verso San Vito are restrained with a descriptive discretion touched by the lightness and elegance of his artist friends.

Giulio Perina, a Mantuan by adoption, represents the most expressionist wing of the group and, turning towards the Informal, he reaches the limits of the figurative. Looking at a painting like Alberi, the words that Francesco Arcangeli dedicated to his “fellow artists” come to mind: “Nature is the immense thing that give you no respite”. Arcangeli was referring to Morlotti, Mandelli, and Moreni, but these words lend themselves perfectly to an artist like Perina and to this work in particular. 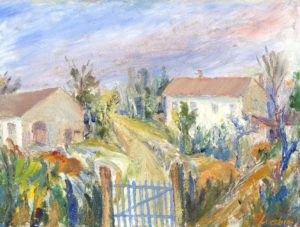 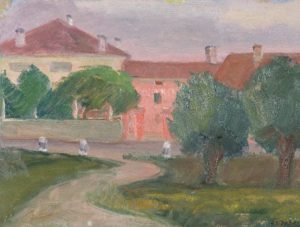 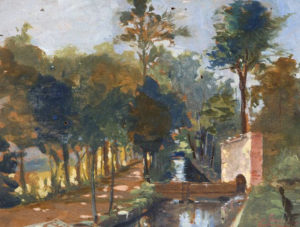