From an artistic background (his father Paride is in fact one of the great figures of Mantuan painting), Aldo Falchi was born in Sabbioneta in 1935. Known in particular for his sculptures, Aldo began modelling from an early age, demonstrating great skill and such an indifference towards contemporary research that the critic Renzo Margonari called him a “modern mannerist”. The passion he put into working the sculptural material, filled with pathos by the intensification, ensured that Aldo Falchi’s works were among the most interesting creations of his generation. In the sculpture in display here, we can notice a purely personal style that pushes the figure to take on a powerful, spontaneous motion, as if coming out of the material to gain a grasp in and on reality. The teratomorphic treatment is one of the most recognisable elements of his work: man is monstrous and his culture cannot conceal his animality. In the highly elegant designs and mixed techniques shown here, this aspect not only fails to disappear, but is very clearly preserved, exploiting the two-dimensionality of the flat surface of the paper in an almost magical way. The indifference towards perspective depth reaches its climax with the conception of backgrounds that shift between the human and the monstrous. Apocalyptic scenes and scenes of rapture are performed in anthropomorphic or teratomorphic circles, in forms of magical and mythical intensification carved out within what is real. With just a few strokes, Aldo Falchi manages to paint a world crawling with figures amid diabolic, caustic features that turn our reality into a terrifying nightmare. 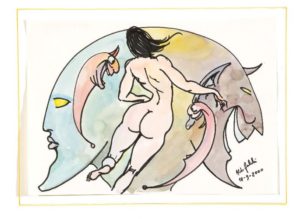 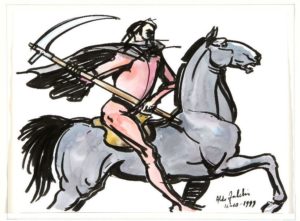 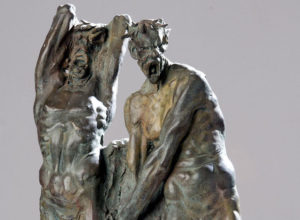