8 – The Castiglionese school: the last upheavals

Danilo Guidetti belonged to what we could define as the “second generation” of the Mantuan chiaristi. From Castiglione, Guidetti is the author of a highly sophisticated and fascinating body of work. While in the watercolour dedicated to the Cupola del Santo, the juxtaposition of the sections reaches a graceful synthesis in our retina, Verso Desenzano recovers a more disquieting and interlocutory dimension. The shadows return, which in Chiarismo appear rare or in any case of weak intensity, and the work seems to envelope the observer in an uncertain and unpromising situation: the natural elements seem to be “on the verge of being unleashed”, and that small central hut offers us the only certainty to cling to.

Having studied in the school of Marini and Mutti, Mario Porta is a few years younger than Guidetti but the relationship between the two was so close that it could be called “fraternal”. Likewise born in Castiglione, Porta constructs his own artistic parabola, making the bright palette and poetic transparency his own, and the painting dedicated to the Torre gonzaghesca (aplace long dedicated to contemporary art exhibitions) is a clear statement of this style. In Paesaggio gardesano, the intensification of the palette towards more substantial colours has reached a stage of development that, without denying the past, shows a rediscovered depth of the spatial elements and a more intense colour scheme linked more to expression than to intuition. 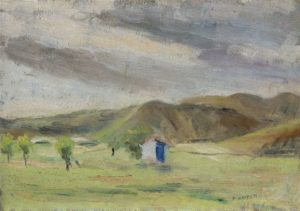 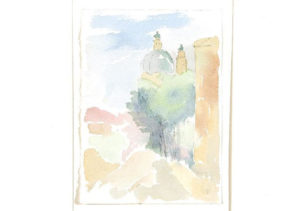